Brands are everywhere, influencing your behaviors by manipulating your emotions. That’s been the case for decades. But rapid evolution of new communications has dramatically increased the frequency of messages. Broadcasting has been replaced with narrowcasting, enabling customized messaging targeted to profiled consumers.

Regardless of your beliefs on politics, pandemics and the economy, we can all agree the world’s in flux. Times of change have always brought huge opportunities to brands who can pivot and reposition for relevance. If you’re not rethinking your brand in terms of this brave new world, your whole enterprise could become extinct or irrelevant.

Revolutions in communication have brought about major changes in the way we live, think, work and relate to each other. It’s a predictable progression: communication evolves, brands pivot, culture responds, and behaviors change. And over the past 20 years,  the cycle has been accelerating at an unprecedented pace. There’s little pause between cycles, and it’s fueled a huge demand for creative branding services.

To understand the present, you have to look at the past. 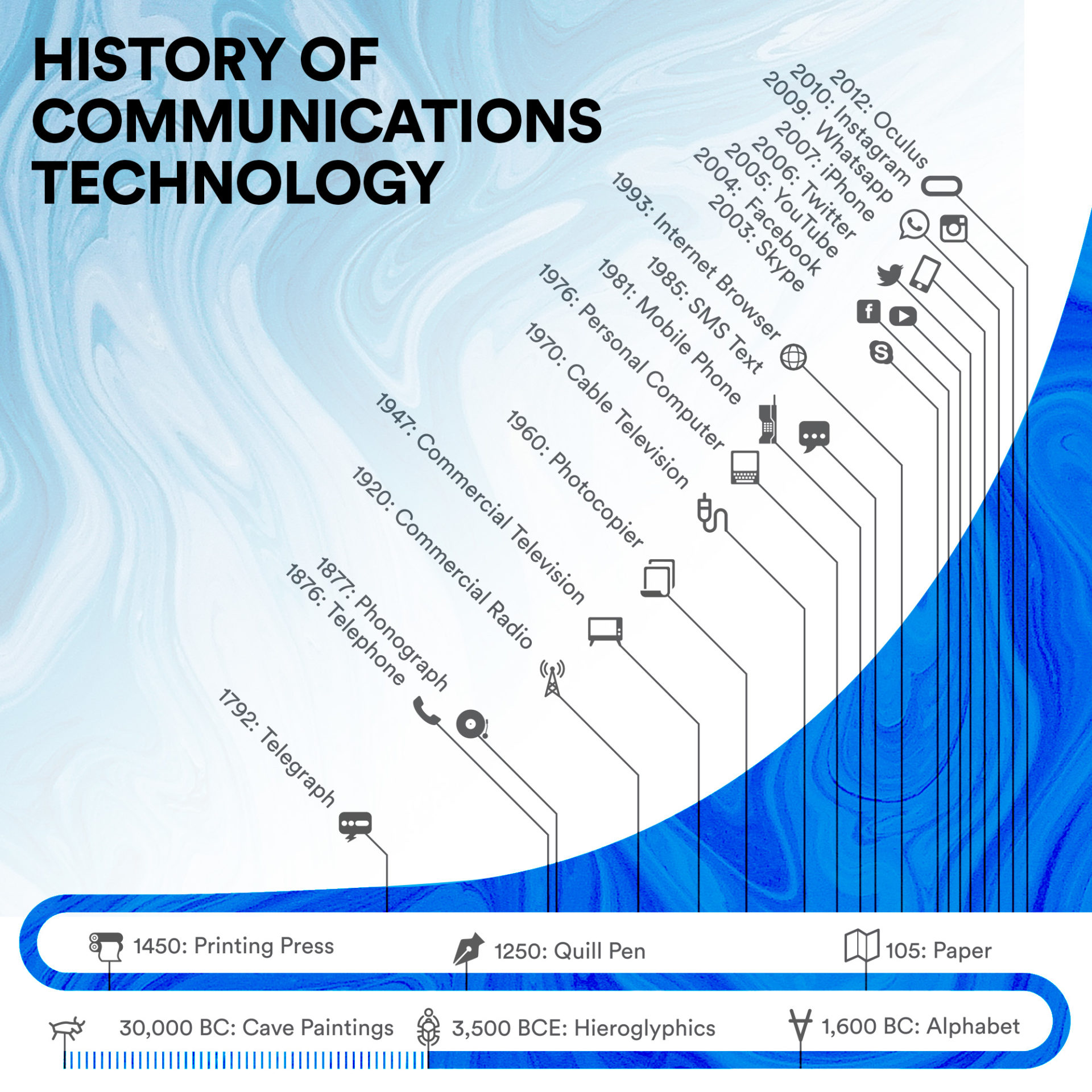 The history confirms what we know intuitively, the pace of advance continues to accelerate. The most notable advancements in communications have all occurred since the turn of the 20th century. But the past two decades have introduced paradigm shifts that have opened the floodgates for low-cost branded communications. With the pace of change increasing and the break between cycles reducing, it poses both opportunity and challenges for your brand. Instead of evolving and resting, brands need to remain in a state of flux to keep up with the market’s continually changing mindset. So ask yourself, what have you done to maintain your brand relevance since March 2020?

Clearly, the next great shift in culture is being shaped by mobile devices and communications. Low cost, connected personal computers are in the pockets of 3.5 billion people on the planet (source). That’s 45% of the planet—a massive audience that can be accessed instantly with amazing simplicity. Reach depends on content, relevance and message. That’s the domain of the brand.

The first iPhone was introduced only 10 years ago. Since then, a whole array of new platforms have emerged to bring content onto smartphones. But cultural maturity takes time, and in terms of mobile communications it’s in its infancy. Perhaps this is why savvy brand strategists have been able to manipulate public sentiment using old-fashioned propaganda tactics in new media.

“Propaganda is the dissemination of information—facts, arguments, rumors, half-truths, or lies—to influence public opinion. Deliberateness and a relatively heavy emphasis on manipulation distinguish propaganda from casual conversation or the free and easy exchange of ideas.”

In terms of manipulating public opinion, mobile is the propagandist’s paradise. For the first time in the history of mankind, it combines the most essential communications elements into a single low-cost, easy to access channel. Using it to sway sentiment is simpler than ever:

Mobile has changed the information lifecycle. Tipping points, the moment in which a trend becomes pervasive, has never been faster than in the age of mobile. Trends come and go at breakneck speed. Trends, in turn, fuel action. Recent social media campaigns to publicize the deaths of African Americans at the hands of police sparked nationwide protests. Action fuels the demand for more content– images, videos, tweets and editorials. As saturation is reached, trends pivot to a new outrage or discovery that captures the collective consciousness.

Brands and ideas trend in a matter of hours, and it’s  fundamentally shifted the way we interact with information. That means there are major repercussions for brands.

According to Google, people today have 2X more interactions with brands on mobile than anywhere else, giving brands major opportunities to increase viewership. Coupled with the rapid content-trending-action cycle and access to personalized data through mobile, brands have unprecedented ability to shape behavior.

Branded content can spread like wildfire, but it’s also risky. Once released, it’s going to be accessible forever. Retracting what’s been shared is nearly impossible. Making the wrong move can be costly, especially when viewed in terms of future cultural acceptability. Times Up. Black Lives Matter. Make America Great Again. What you shared years ago might not look good in terms of today’s frame of reference.

Developing an informed strategy is essential to prevent false steps that can be disastrous in the future. Sure, the stakes are high. That’s what volatility brings to the table. It’s a high-risk-reward equation that is within reach of those willing to make the effort. A smart strategy rests on a solid foundation of core brand principle:

Free thought still exists, but there’s a major opportunity to influence it. Opening your eyes to what’s really happening is the beginning. Lewis Carroll crafted an iconic image for that awakening with a white rabbit who leads Alice into wonderland. It’s easy to think that the state of the world today is as absurd as the Mad Hatter’s tea party.  But for those who can see through it, there are important lessons to inform your choices.

So, if you’ve found an opportunity in these times of change, then you’re ready for a journey into the wonderland of branding. It’s an adventure that’s both rewarding and exciting, but not for those without a spirit of curiosity.

“Would you tell me, please, which way I ought to go from here?’
‘That depends a good deal on where you want to get to, ‘ said the Cat.
‘I don’t much care where” said Alice.
‘Then it doesn’t matter which way you go, ‘ said the Cat.
‘- so long as I get SOMEWHERE,’ Alice added as an explanation.
‘Oh, you’re sure to do that,’ said the Cat, ‘if you only walk long enough.”